If lawmakers at your capitol were to consider naming a firearm that is representative of your state’s heritage, what do... 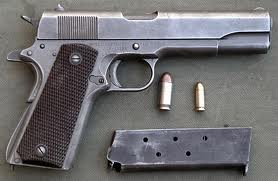 If lawmakers at your capitol were to consider naming a firearm that is representative of your state’s heritage, what do you think it would it be?

With a stroke of Gov. Gary Herbert’s pen last week, Utah became the first state in the country to have an official gun; John Moses Browning’s M1911 semi-auto pistol. A pair of other states may follow suit this year, as lawmakers in Arizona and Alaska also consider designating state firearms.

Utah native John M. Browning’s famous 1911 handgun now joins the elk as the state animal, the Bonneville cutthroat trout as the state fish, and the Dutch oven as the state cooking pot.

Widely considered a genius of his era, Browning’s most enduring legacy was the short recoil design behind the 1911 handgun, which remains the pre-eminent operating system in today’s semi-auto handguns, a century after it was first introduced.

Earlier this month, the Arizona Senate approved a measure to designate the Colt single-action Army revolver as the Arizona state firearm by a vote of 18-12. SB1610 now awaits action in the House.

On Friday, a bill introduced by Sen. Charlie Huggins (R-Wasilla) would designate the pre-1964 Winchester Model 70 in .30-06 caliber as the state gun of Alaska.