I have gophers in my yard and a Labrador puppy who likes to dig after them. This underground rat invasion... 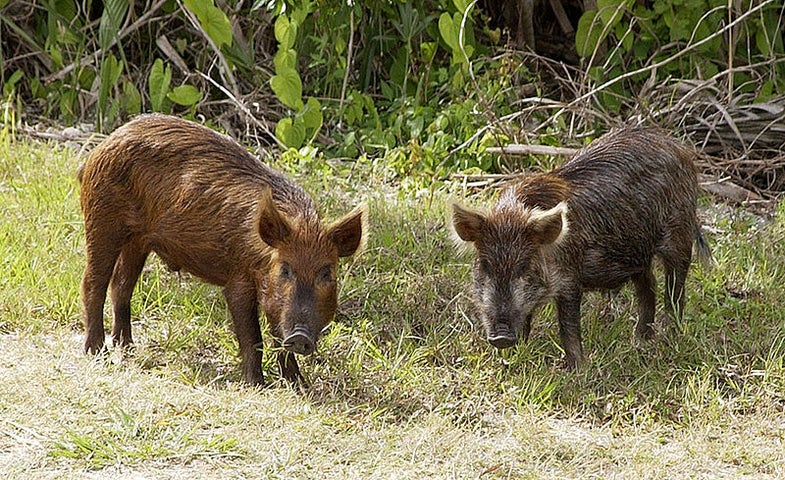 I have gophers in my yard and a Labrador puppy who likes to dig after them. This underground rat invasion and my dog’s misguided assistance have left my half-acre of St. Augustine littered with holes and more pockmarked than Mickey Rourke’s face.

Yet I’m fortunate in the amount of yard destruction I’ve faced because three and a half hours north of me in Ft. Worth homeowners are facing the equivalent of nature’s bulldozers on a nightly basis.

For weeks, hordes of feral hogs have rampaged through the neighborhood of River Bend Estates. The pigs, which are believed to have immigrated from a wildlife preserve adjacent to the neighborhood, have destroyed yards and expensive landscaping and frightened families. Describing the herd outside of her home one night, Jeanie Turek said, “It sounded like a stampede of cattle just running by the side of the house — scared me.”

What’s even scarier than the hogs, however, is the cost of repairing the damage they inflict. The River Bend Estate Homeowner’s Association doles out steep fines for unkempt or destroyed yards, so residents must repair their destroyed grounds quickly. In some cases, such as with Turek, the repairs run into the thousands of dollars. This has left many within the neighborhood crying to the city for help.

Unfortunately there’s not much the city can or will do. Shooting within the city limits is illegal, the Ft. Worth Animals Services won’t deal with hogs, and police will come only when there are hogs on the premises. Trapping is another dead end. According to Texas Game Warden Capt. Neal Bieler, “You hardly ever trap them all. You may push them out of an area, and they may be gone for a year or two, and they could show up again.”

Considering that Texas has an estimated 4 million feral hogs within its borders, the pig situation that currently plagues River Bend Estates is only a hint of what’s to come.