Get down, here they come … by the millions. Over the next few days and weeks snow geese will return... 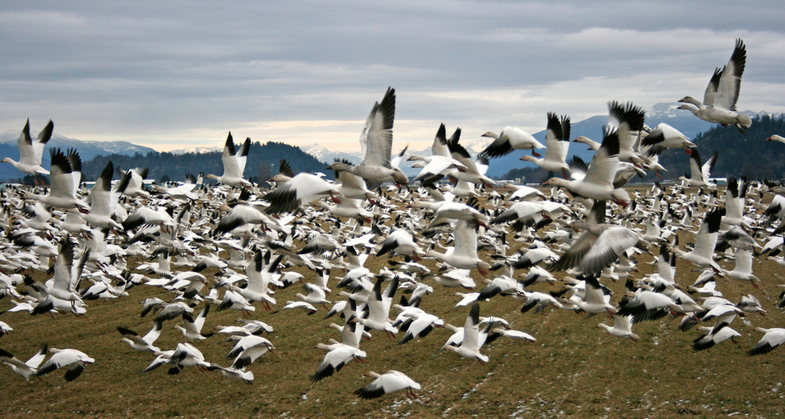 Get down, here they come … by the millions. Over the next few days and weeks snow geese will return north to their arctic breeding grounds. Along the way they’ll cloud out the sun along flyways across the country.

For years wildlife officials have unsuccessfully tried to decrease the snow goose population by offering spring hunts that don’t have bag limits and allow waterfowlers to use electronic calls and unplugged shotguns (but double check your regulations before heading afield). According to Mike Johnson, a game bird management specialist from North Dakota, the goose kill has ranged from about 1.2 million to 1.5 million since the spring hunts were authorized in 1999.

But that’s not enough.

No one knows exactly how many snow geese are out there, but some experts estimate that there could be more than 2.5 million birds. That’s way too many for their fragile arctic breeding grounds.

“We haven’t cut the population back at all,” Johnson told the Grand Forks Herald. “It’s still growing, but at a much slower rate.”

By starting the spring hunts, game managers wanted to triple the harvest and see a recovery in the costal arctic habitat the birds are destroying, according to the Herald. But neither of those goals have been met.

The problem is that snow geese are tough birds to hunt. They’re wary, fly in huge flocks, are highly adaptable to hunting pressure and can disappear from an entire region with the change of the wind.

Also, a snow goose can live for 20 years (and you thought that five-year-old whitetail on the back 80 acres was wily).

But if you’re undeterred by these odds, then grab your shotgun and help out the conservation effort this spring.

You can track the snow goose migration here.