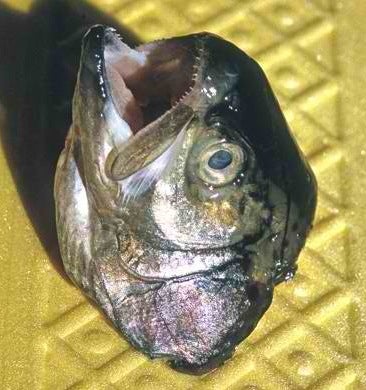 Last week, Christopher Pluntz, 44, pleaded guilty to misdemeanor theft after investigators discovered the 443 rainbow trout heads he turned in for $15 each (that adds up to $6,645) in 2010 were a fraud.

Pluntz was trying to take advantage of an incentive program implemented in 2007 and administered by the Idaho Department of Fish and Game that pays anglers $15 each for lake trout and rainbows exceeding 12 inches caught from Lake Pend Oreille and other selected waters in the state. The bounty is intended to encourage anglers to catch and remove fish that are natural predators to kokanee, a trout species that is struggling to survive there.

To participate in the program, anglers are instructed to provide trout heads measuring at least two inches in length to one of the IDFG freezer locations.

Investigators determined that Pluntz’s rainbows were a coastal variety and likely came from Rufus Woods Lake or Lake Roosevelt in the state of Washington.

The fish-head fraudster was originally charged with felony theft, though it was reduced to a misdemeanor in exchange for his guilty plea.

Last week, Judge Justin Julian ordered Pluntz to pay $6,870 in restitution to the state of Idaho and a $500 fine. Further, he was sentenced to 180 days in jail with 170 days suspended and ordered to serve 64 hours on the sheriff’s labor program.