A shipment of some 8,000 rainbow trout used to stock several Western Maryland streams earlier this month contained some fish... 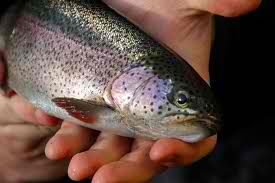 And in what can only be called a wicked twist of fate, on March 21 Maryland became the first state in the country to enact a ban on felt-soled waders worn by anglers in an effort to prevent the spread of aquatic hitchhikers and parasites–specifically parasites like the one causing whirling disease.

The diseased trout, which were stocked in the North Branch Delayed Harvest Area, Evitts Creek, Jennings Run and Sidling Hill Creek on May 11 by the Maryland Department of Natural Resources, were provided by a private contractor that has since been found to have the proper paperwork and a three-year disease-free track record.

Whirling disease has been confirmed in 24 states and was introduced into the eastern US from Europe in the late 1950s. It was first discovered in Maryland in 1995 in the North Branch Potomac River. Although the parasite is harmless to humans, it can enter the skeletal tissue of trout, producing severe damage to infected fish and causing them exhibit the erratic “whirling” swimming behavior for which the disease is named.

In recent years, research has shown that felt-soled waders can contribute to the spread of whirling disease as well as the slimy invasive algae Didymosphenia (didymo for short), also known as “rock snot.”

In addition to Maryland, both Vermont (effective April 1) and Alaska (effective Jan. 1 2012) have enacted bans on the use of felt-soled waders. Other states may soon follow.

On the bright side, Maryland fisheries biologists say the stocking of these diseased fish could be problematic only if anglers move trout from one stream to another. Typically, stocked trout are caught soon after stocking or die during the summer when water levels fall and temperatures rise.