Known colloquially by many anglers as shellcrackers, the redear sunfish is a perennial favorite for springtime pond fishing–along with bobbers... 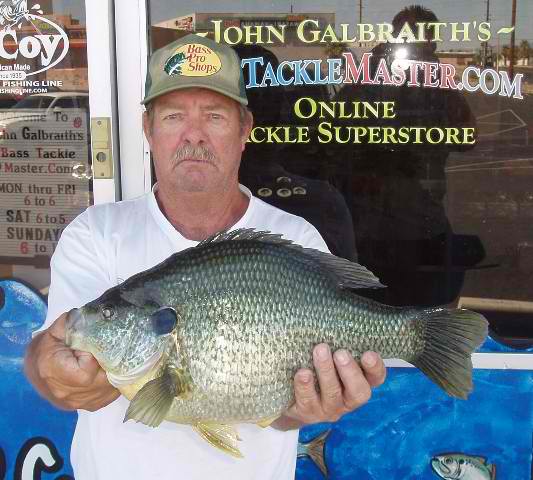 Known colloquially by many anglers as shellcrackers, the redear sunfish is a perennial favorite for springtime pond fishing–along with bobbers and nightcrawlers–and preferably with a young companion or two.

A fishing basket full of hand-sized ‘crackers can usually provide enough filets for a nice fish fry. That is, unless you’re Robert Lawler of Lake Havasu, Arizona.

While fishing the lake near his home on May 2, Lawler landed the redear of every angler’s dreams, weighing 5.55 pounds and measuring 16.75 inches with a 19-inch girth.

Lawler, who was fishing for bass at the time, was using a Texas-rigged 7-inch Power Worm.

The Arizona Game and Fish Department has already confirmed the weight and species, declaring the fish as the new state record–exceeding one caught in the same lake in 2010 weighing 4 pounds, 2.24 ounces.

Now, on to World Record territory.

If Lawler’s catch is certified by the International Game Fish Association, the sunfish could nudge the current world record out of the top spot it has held since 1998. That 5-pound, 7-ounce fish was caught by South Carolinian Amos Gray.

Biologists say it may be just a matter of time before a bigger redear is caught from Lake Havasu or another Colorado River impoundment, mainly because one if its favorite things to eat is becoming more plentiful there–to the consternation of fisheries managers. Rory Aikens, avid angler and longtime public relations writer for Arizona Game and Fish, reports that Colorado River redear are filling up on the invasive quaqqa (zebra) mussels that are become increasingly prevalent in those waters.