Burglary Victim Gets His Gun Back 29 Years Later

In case you’ve ever doubted the importance of documenting the serial numbers on all the firearms you own, Ronald Johnson... 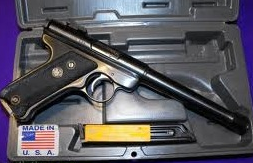 In case you’ve ever doubted the importance of documenting the serial numbers on all the firearms you own, Ronald Johnson of Eaton County, Mich. would probably like you to know about the .22 pistol returned to him by police last week–after 29 years.

The Ruger .22 cal. Mark I rimfire pistol stolen from Johnson’s home during a burglary in 1982 is back in his possession, thanks to the work of the Lansing Police Department–and the fact that he reported the incident using the gun’s serial number.

At the time of the burglary, Michigan State Police entered information about the gun into the Law Enforcement Information Network. In January 2010, the Lansing Police Department recovered the gun while investigating a crime. It was held as evidence for a trail in the case until recently.

No one was ever charged in the 1982 burglary, and it’s unknown where the gun was for the prior 28 years.