In what is reportedly the first case of its kind on record, a federal grand jury has indicted three men... 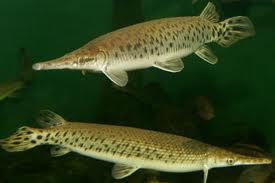 In what is reportedly the first case of its kind on record, a federal grand jury has indicted three men for allegedly conspiring to smuggle live alligator gar caught from the Trinity River in Southeast Texas to a client in Tokyo, Japan.

Loren Willis, 62, of Eminence, IN, Gerard Longo, 46, of Greenacres, FL, and Michael Rambarran, 55, of Miami, were charged Wednesday in Beaumont, TX Federal Court with Lacey Act violations, according to a press release from the U.S. Attorney’s Office.

The Houston Chronicle reports that two Tokyo dealers paid the men $15,000 to procure the four alligator gar, examples of the largest freshwater species in North America. Each measured about four feet in length–though the fish can grow longer than 10 feet in the wild.
Live American alligator gar in the eight-foot range have been known to fetch as much as $40,000 in Japan, where executives often display exotic fish species in huge office aquariums.

According to investigating U.S. Fish and Wildlife agent Jim Stinebaugh, Willis and Longo accompanied the Japanese dealers to the Trinity River in late 2010, where the fish were caught. They unsuccessfully attempted to ship the live fish from George Bush Intercontinental Airport in Houston but were stopped because they could not produce the necessary documentation.

Investigators allege the pair then used a van equipped with tanks to transport the fish to West Palm Beach, FL, where they were kept in a swimming pool until arrangements were made with Ornamental Fish Distributors Inc., owned by Rambarran, to ship them to Japan. Documentation provided by the importer falsely listed the fish as farm-raised and not wild or as originating from Texas.

If convicted, they each face up to five years in federal prison and a fine of up to $25,000.