When police in Independence, MO received a report of an alligator wandering near a creek, they contacted the state Department... 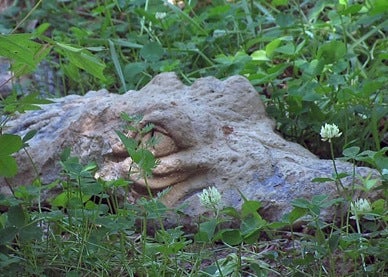 When police in Independence, MO received a report of an alligator wandering near a creek, they contacted the state Department of Conservation, which instructed the authorities in the Kansas City suburb to dispatch the reptile if located.

Soon thereafter, one of Independence’s finest spotted the critter and without hesitation, shot twice with his service pistol.

“The officer fired two rounds, and killed my concrete, ornamental alligator,” said Rick Sheridan, who heard the gunshots on his property and discovered the cops, who were obviously trying to recover from an embarrassing Barney Fife Moment.

Since the incident, the police department has formally apologized to Sheridan, who said he placed the faux gator on his property to “keep kids from trespassing.”

He said he became frustrated after numerous “No Trespassing” signs he posted were removed by vandals, so he purchased the cement gator replica and placed it in the weeds near the creek.

Needless to say, the gator successfully garnered the attention of at least one youngster, who reported the stealthy reptile to authorities.

Sheridan told the local television station that the incident has made him something of a local celebrity.

“I walked into a hardware store, and two gals said ‘Look there, that’s the alligator guy!'” he said.