NJ Man Tries to Help Rattlesnake Across Road, Gets Bitten 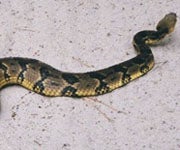 Nelson Drinkwater, 24, a self-described snake enthusiast and animal lover, spent multiple days hospitalized in serious condition after he was bitten by a timber rattlesnake he says he tried to help traverse a busy road. The Little Egg Harbor Township man said he pinned the snake to the ground with a stick and was bitten when he tried to grab it behind the head–just as he’s done with non-poisonous snakes he’s kept as pets.
Instead, the snake slipped and at least one of its fangs dug into the snake Samaritan’s right hand.

Timber rattlers are a rare and protected species in New Jersey.

The actual bite felt like a gnat landing on his hand, Drinkwater later said. But almost immediately the venom, which causes blood to thin and tissue to liquefy, made his hand and mouth feel like pins and needles. His tongue began to swell.

Drinkwater’s mother, Donna, who witnessed the snakebite, said she was terrified when she saw the whites of her son’s eyes and was scared he was going to suffer a seizure. She immediately drove him to a nearby ranger station at Bass River State Park, where medical help was summoned. He was airlifted to AtlantiCare Regional Medical Center, Mainland Campus in Galloway Township, where he received multiple antivenin treatments and remained under care for three days before he was released.

After the painful ordeal, Drinkwater says he has an increased respect for venomous snakes and he’ll give them more respect in future encounters.

As far as helping timber rattlers to cross roads in the future, he says he’ll use an extremely long stick.