Trappers Pull 12-Foot Gator Out of Back Yard In Florida

Just when you thought it was safe to get back in the water … This week, state licensed nuisance alligator... 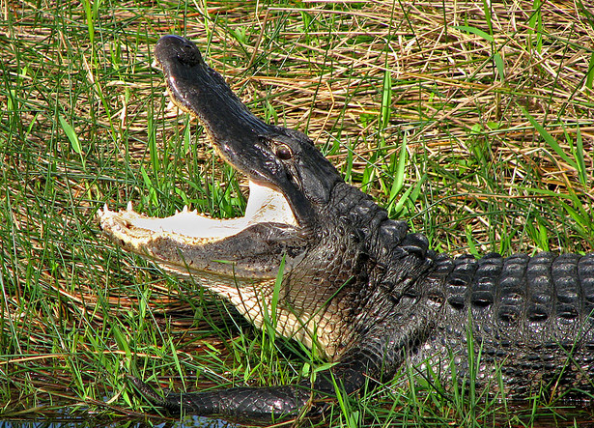 This week, state licensed nuisance alligator trappers removed a 12-foot, 650-pound American alligator from a residential area in northern St. Johns County Florida. The alligator had been living in the waters off Jason Smith dock and, according to Smith, began eyeing his dogs. Alligators are nothing new to the town of Julington Creek and as Smith detailed to KPLC- TV, “We see a lot of 4 footers and 6 footers. It’s really no deal. This thing was 12 foot.” Upon seeing the size of this leviathan Smith was concerned not only for his dogs but for himself and his neighbors. “We swim in the river so this gator has got to go,” Smith said.

It didn’t take long for the trappers to make contact with the monster and when they did what unfolded has been described in the media as a scene from Jaws. Trappers harpooned the gator with line attached to several boules. This infuriated the reptile, and it took off in a boil of water. Once the trappers did get the alligator at bay it took Smith and a few onlookers to help get it out of the water.

I know firsthand how much of a fight an alligator of this size can put up when hooked. A little more than a decade ago, I took a 12’4″ alligator in the mosquito infested swamps of Palacios, Texas. It took three12-gauge slugs to get him to calm down. Later, when the alligator was skinned, my hunting partner and I realized that my first shot had severed the gator’s spinal cord completely. Still, that monster managed to drag my 14-foot John boat with two people in it around the swamp for almost a half an hour before I could get another shot into it. After witnessing such displays of strength, it is easy to see why the alligator hasn’t evolved one second over 100 million years. It’s perfectly adapted as is.

My gator never went after dogs but apparently had lived on wild boar and deer for more than 80 years. His skin still hangs in my office to this day. I can’t imagine something that size living off a dock in my backyard however.