The death of a mountain lion in Connecticut last week has resulted in more questions than answers in the wake... 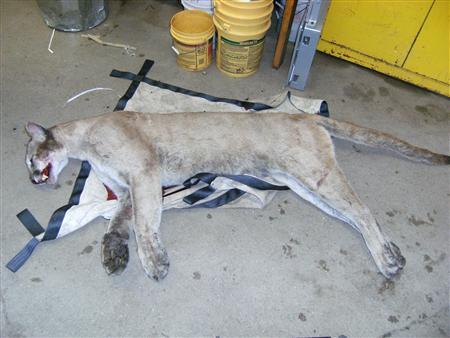 The death of a mountain lion in Connecticut last week has resulted in more questions than answers in the wake of new reported cougar sightings in Greenwich yesterday.

The posh suburb of Greenwich, located about 70 miles from New York City, was buzzing late last week after residents reported several sightings of a big cat roaming the woods. Scat, paw prints and photographs lead the Connecticut Department of Environmental Protection to confirm the cat’s existence, but insisted that the mountain lion was most likely an animal that had been held in captivity and either escaped or was released.

The story took a turn Friday night when a 140-pound mountain lion was struck and killed on Route 15 in Milford, Connecticut, located about 40 miles from Greenwich. Despite the fact that this cat would have also had to swim the Housatonic River in order to have made it from Greewich to Milford, the D.E.P. believes that the lion spotted in Greenwich and the one killed in Milford are one in the same and are trying to match up paw prints collected in Greenwich with the dead cat.

The plot took a further twist on Sunday, however, when Greenwich police received two more reports of mountain lion sightings. The investigation is ongoing.