3 Die from Elephant Attacks in Kenya

It’s probably the best reason I’ve ever heard for skipping school. According to the Nairobi Star, students in Kenya’s Narok... 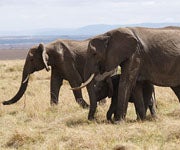 According to the Nairobi Star, students in Kenya’s Narok South district have been coming to school late, leaving early, or not showing up at all for fear of killer elephants from the Maasai Mara game reserve. Executive Secretary of the Narok County Kenya National Union of Teachers, Denis Rakwa, said the jumbos “have been interrupting the normal learning in schools with some children and teachers going for weeks without reporting for fear of being attacked by the marauding animals.” Considering that the elephants are responsible for three deaths thus far, including a Kenya Wildlife Service Ranger who was mauled to death earlier this week when his rifle failed to work, I think the kids and their teachers have a pretty valid excuse for avoiding education.

Not only do these attacks interfere with the educational system in Kenya but as Kenya Maasai Council of Elders chairman, Kasaine ole Esho, told reporters, it doesn’t bode well for tourism either. I’d tend to agree as I try to avoid traveling to places where wild elephants kill people walking home from the market. But then I’ve been called a wimp before so that just might be me.