Officials in Ecuador found 357 dead sharks in a fishing boat that was caught illegally fishing off the Galapagos Marine... 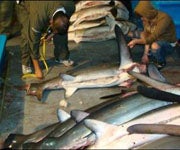 Officials in Ecuador found 357 dead sharks in a fishing boat that was caught illegally fishing off the Galapagos Marine Reserves.

Shark fishing has been prohibited in the Galapagos area since it was declared a U.N. World Heritage site in 1979. But that has not stopped shark poachers from operating in the protected waters, and illegal shark fishing remains a highly profitable business. Officials believe the sharks were caught to supply demands for shark fin soup in Asia.

The shark species found on board were only gutted, with their fins intact. Sharks caught illegally usually have their fins cut off before they are thrown back into the water. The species found on the boat were: 286 bigeye threshers, 22 blue sharks, 40 Galapagos sharks, 6 hammerheads, 2 tiger sharks and 1 mako shark.

The 30 crew members of the fishing boat have been detained and are awaiting trial. The Galapagos Park officials said the crew will face criminal charges.