Pennsylvania is One Step Closer to Hunting on Sunday

Last week’s passage of a resolution by the Pennsylvania Game Commission calling for an end to the historic ban on... 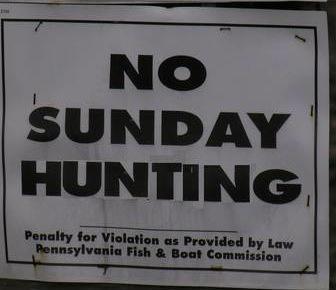 Last week’s passage of a resolution by the Pennsylvania Game Commission calling for an end to the historic ban on Sunday hunting and the introduction of legislation that would lead to the reversal of the decades-old restriction is being praised by a coalition of hunting and conservation groups.

Under the leadership of the National Shooting Sports Foundation, members of the Sunday Hunting Coalition are encouraging all sportsmen in Pennsylvania to contact their state legislators to urge them into co-sponsoring HB 1760.

Passage of the measure would shift authority to regulate Sunday hunting from the General Assembly, where it currently resides, to the Game Commission. Allowing hunters in Pennsylvania afield on Sundays is part of a larger effort to increase participation in hunting. That effort also involves improving access and opportunity for sportsmen living in the state.

Since most sportsmen participate in hunting on weekends, supporters say removing the ban on Sunday hunting will effectively double the value of each hunter’s license.

The prohibition of hunting on Sunday in Pennsylvania has stood since colonial times.