La Salle, Texas teenager Carter Pope shot a chupacabra Sunday morning. At least he thinks it’s a chupacabra, and so... 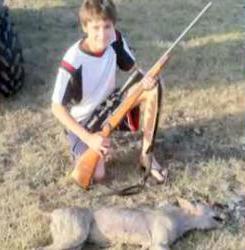 La Salle, Texas teenager Carter Pope shot a chupacabra Sunday morning. At least he thinks it’s a chupacabra, and so does his family.

Pope, 13, told KPRC in Houston that he saw the alleged goat sucker outside his window shortly after he woke up July 17. Like any good Texas boy, he shot it dead. Of course he told his father he was going to shoot it first. After all, his dad was asleep and even in Texas it’s best to ask your parents for permission to shoot supposed mythical creatures from your bedroom window.

Pope’s father, Will, told reporters his initial thoughts after being awoken, “I thought ‘I’m dreaming or this kid is crazy. Probably a little bit of both.” But when dad actually saw the animal, he too thought it was a chupacabra.

The younger Pope took three shots to kill the chupacabra at a distance of about 200 feet. The Pope family concedes that it might be a mange ridden or hairless coyote, but I for one like the chupacabra angle. What do you think Outdoor Life readers? Is it a goat sucker? A coyote gone ugly? How should the Pope’s have it mounted? Comment below.