According to MSNBC.com, park rangers in Thailand have apprehended two suspected poachers after a fierce gun battle with them. A... 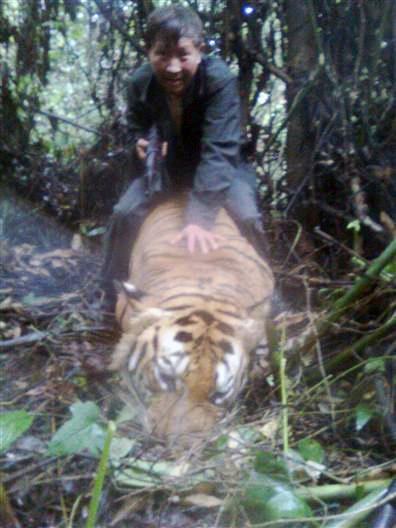 According to MSNBC.com, park rangers in Thailand have apprehended two suspected poachers after a fierce gun battle with them. A third suspect managed to escape. The two unidentified men were carrying insecticide, which is often used to poison tigers, animal body parts, and – here comes the really idiotic part – a cell phone with pictures of them standing with rifles over a dead tiger!

“Nah man, that’s like two other guys. Or something. With a dead tiger.”

The cell phone also had pictures of elephant tusks which led the rangers to believe the men also poached elephants. When confronted with the pictures, the two men said it was a cat they poached in Myanmar in 2003.

Park rangers knew better however. As reported to MSNBC.com, “Wildlife Conservation Society Thailand staff [said] the tiger (identified by its unique stripe patterns) was a well-known male tiger that researchers had tracked with camera traps in Thailand for at least three years between 2008-2011.”

Guess the rangers had pictures of their own, poacher boys! Boo ya!

The WCS believes that the two poachers are part of an organized crime ring that has killed up to 10 tigers in the area. Considering that there are only an estimated 2,500 breeding adult tigers left in the wild (IN THE WORLD) that’s ten tigers too many.