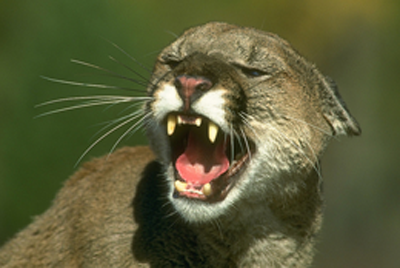 A large healthy looking cougar is stalking mountain bikers near Alice Lake, British Columbia. The lion came across three groups of mountain bikers last weekend, and while it didn’t attack, it was curious.

“The animal was very difficult to scare off, and showed considerable interest in the humans,” conservation officer Chris Doyle told Local station CTV.

Three cougar sightings in one day are a lot, and Doyle worries the cougar’s aggressive attitude will lead to an attack or mauling soon.

If you see a cougar do not to run. Running prompts the cougar’s predatory instincts, instead Doyle says you should face the animal, make yourself look big, and make some noise, but never turn and run.