Just weeks after the striped bass world record was broken (unofficially), another striper record has bitten the dust (officially). In... 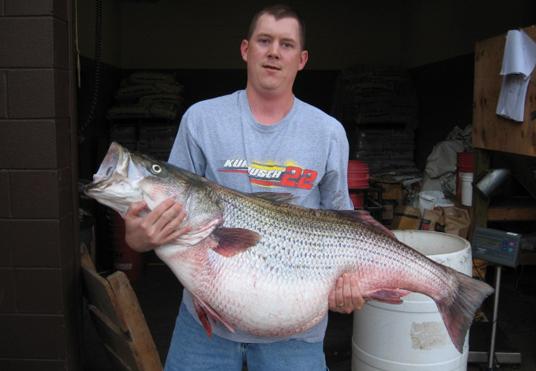 Just weeks after the striped bass world record was broken (unofficially), another striper record has bitten the dust (officially). In June, Bruce Cunningham, 30, landed this massive 60-pound 8-ounce striper on Missouri’s Bull Shoals Lake, according to MDC News. Yesterday, the catch was approved as a state record by the Missouri Department of Conservation. The fish measured 47 inches in length and had a 36-inch girth.

Cunningham was out with his brothers on his first striper trip and was casting a large plastic minnow in about 40 feet of water. Cunningham and his two brothers had already boated several other large fish (40 pounders) before the record-breaker hit.

Interestingly, striped bass aren’t even supposed to be in Bull Shoals Lake, which sits along the Arkansas/Missouri border. They were stocked there on accident in 1998.

“We were expecting a shipment of walleye for Bull Shoals,” said Ken Shirley, district fisheries supervisor for the Arkansas Game and Fish Commission. “A summer helper called to tell us that a shipment of fish had arrived at the hatchery and asked where they were supposed to go. We thought it was the walleyes, so we told him to take them to Bull Shoals. It turned out they were striped bass.”

According MDC News, Shirley says the surviving fish from that stocking now weigh between 30 and 60 pounds and are slowly reaching the end of their life span. He says the boom in trophy striper fishing at Bull Shoals will taper off over the next five years as fish from the accidental stocking begin to disappear.