My home state of Texas was on fire a few months ago. Well, not the whole state; just a little... 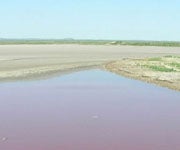 My home state of Texas was on fire a few months ago. Well, not the whole state; just a little over a million acres of it. Now that the flames are out, we’re contending with another problem – drought. How dry is it? Well, according to the National Drought Mitigation Center, 75 percent of the state is in “exceptional” drought. It’s so dry here in Texas that our lakes are weeping blood! OK, not actually “weeping blood” but some are turning blood red.

The largest and most talked about is the OC Fisher Reservoir in San Angelo State Park in West Texas. This lake used to be a popular destination for anglers but now it lays a stagnant home to thousands of dead fish, including some trophy largemouth bass. Whatever water that is left has turned blood red. According to Texas Parks and Wildlife Inland Fisheries officials, the color is caused by Chromatiaceae bacteria which thrive in oxygen-deprived water.

Of course this blood-red water has some folks thinking that Texas is entering the end times. The biggest proponent of this theory is the Indiana preacher, Paul Begley, who took to YouTube to quote the Biblical book of Revelation. In the video, Begley reads, “The second angel poured out his bowl on the sea, and it turned into blood like that of a dead person, and every living thing in the sea died. The third angel poured out his bowl on the rivers and springs of water, and they became blood.”

No offense to Mr. Begley or his followers, but I’m going with the Chromatiaceae bacteria theory.

Just for kicks here’s some of the most extreme weather Texas has ever experienced.