Tim Stroh, his parents, and a family friend went alligator hunting after they heard rumors that a large gator was... 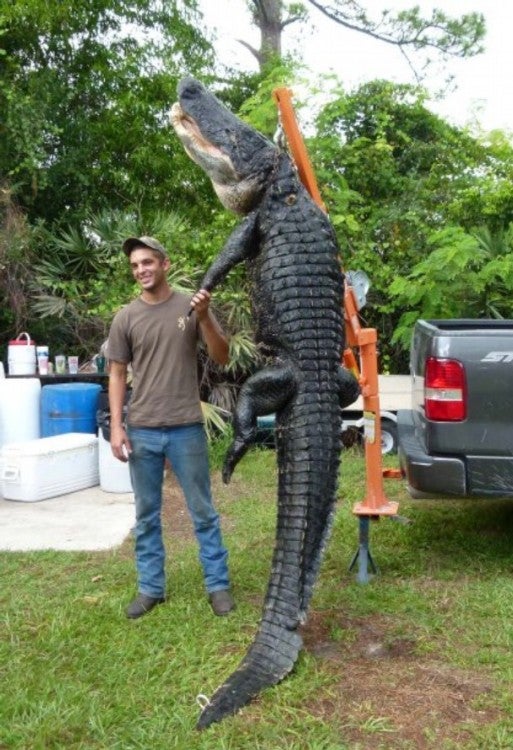 Tim Stroh, his parents, and a family friend went alligator hunting after they heard rumors that a large gator was patrolling the locks of Florida’s St. Lucie River. After an hour on the water the group spotted what they originally believed to be a 9-foot alligator. The hunting party took turns tossing lines at the gator in an attempt to entice it to bite, but it wasn’t until Tim casted a bait with his self-described “puny bass rod” that the gator bit.

Once Tim started reeling the gator in, he realized it was quite a bit larger than he thought. Tim told WESH.com “I had adrenaline pumping through me and I was just like, ‘Oh my God. The alligator “came up and he was popping his jaw and stuff.” Tim killed the alligator with a .44 magnum bang stick once he managed to get it close to the boat.

So what do you do with a 12-foot, 3-inch, 800-pound alligator? Well, Tim gave his to his parents, Steve and Rachel, who just happen to be taxidermists.

Steve told WPTV, “I’m gonna mount the head for him so he can put it in his room.” Rachel added that she plans on turning one of the gator’s legs into a lamp and the back hide into key fobs. The Strohs plan to turn the 250 pounds of meat they got from the gator into sausage.

What would you do with a gator this big? Comment below!