An obscure yet dangerous species of ant, the Raspberry Crazy Ant, is becoming more common in the United States, reports... 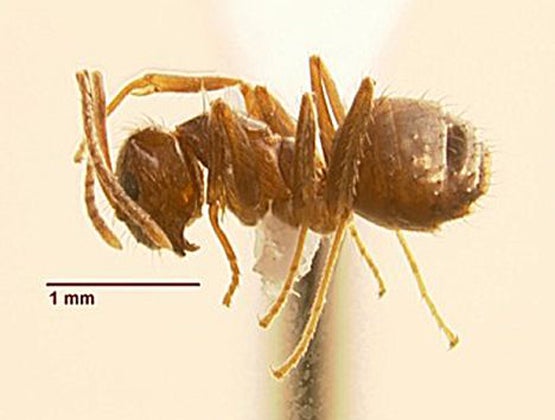 An obscure yet dangerous species of ant, the Raspberry Crazy Ant, is becoming more common in the United States, reports the Daily Mail.

The invasive insects, which are red or brown and roughly the size of a grain of rice, first arrived in the states from Caribbean ships that subsequently docked in Southern ports. The ants quickly spread to a number of states, including Texas and Mississippi. Louisiana is the most recent state to report the ants’ presence.

The ants are extremely aggressive, and are covered with sharp, hair-like structures (similar to the fine hairs on a raspberry drupelet, which is where the ants get their name).

Sportsmen down South should take particular caution when hunkering down in the woods. The ants build large nests, which often contain massive colonies of more than several thousand ants. The ants don’t shy away from attacking humans or dogs, and have seemingly not been deterred by traditional insect control methods.

Photo by: The Daily Mail