A grizzly bear entered Jeremy Hill’s backyard on May 8, 2011. His children were playing outside. Hill took immediate action... 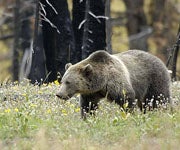 A grizzly bear entered Jeremy Hill’s backyard on May 8, 2011. His children were playing outside. Hill took immediate action by shooting the bear with his daughter’s .270. Knowing that grizzlies are an endangered species, Hill called the Idaho Department of Fish and Game to inform them that he had shot a grizzly. Two officers came to inspect the shooting and ruled it was done so in defense of his family.

Just when you think common sense prevailed, this happens: A U.S. Attorney charged Hill on Aug. 8 with killing an endangered species. Public outcry was almost immediate. People from all walks of life, including several state officials, felt Hill was a hero for protecting his family and that prosecuting him was idiotic. The U.S. Attorney dropped all charges against Hill on Sept. 8, after he agreed to pay a $1,000 fine. This decision did little to assuage the populace who felt Hill did the right thing by shooting the bear.

Now, and perhaps because of this incident, Idaho Senators Mike Crapo and Jim Risch and Congressman Raul Labrador are introducing Federal legislation that would amend the Endangered Species Act (ESA) – permitting individuals to protect themselves and their family from a grizzly if they are threatened.

The new legislation states: “Notwithstanding any other provision of law . . . the provisions of this Act shall not apply with respect to the taking of any grizzly bear by an individual who demonstrates by a preponderance of the evidence that the individual carried out the taking as a result of 1) self-defense; 2) defense of another individual; or 3) a reasonable belief of imminent danger posed by the grizzly bear to any individual.”

Good idea, right? Yes and no.

Yes, because Hill’s actions to protect his family, and others like him in the future, would now be legal. However, there is already an amendment that’s been a part of the ESA since 1978 that allows the exact same thing, and it reads almost word for word like the one Crapo and Risch will introduce. The United States Code: Title 16, 1540 says:

For Criminal Violations: “Notwithstanding any other provision of this chapter, it shall be a defense to prosecution under this subsection if the defendant committed the offense based on a good faith belief that he was acting to protect himself or herself, a member of his or her family, or any other individual, from bodily harm from any endangered or threatened species.”

Why would politicians propose a law that’s already in the books? To look good in front of their constituents of course.