Shoot to Kill Order for White Wolf in Northern Idaho

Earlier this summer a white arctic wolf escaped a wildlife enclosure in northern Idaho called Wolf People. The wolf has... 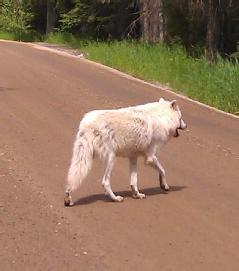 Earlier this summer a white arctic wolf escaped a wildlife enclosure in northern Idaho called Wolf People. The wolf has since been spotted roaming a nearby neighborhood and residents are worried that there will be an attack soon.

In June Wolf People, a wildlife enclosure that raises wolves for educational purposes, noticed that one of its wolves dug beneath a fence and escaped. The group looked for the wolf, but did not notify Idaho Fish and Game, because they were worried neighbors would be alarmed, according to KXLY.com. After awhile they gave up the search and assumed the wolf was dead.

Eventually a resident spotted the wolf crossing a road, snapped a photo of it and brought the photo to Fish and Game. Wolf People only admitted losing a wolf after Fish and Game questioned them about the photo.

“We understand that people do have a concern and with this particular animal, if it is our wolf, it is not a threat to anybody, he’s extremely nice,” wolf handler Michael Marzio told KXLY.com.