The federal government is taking extreme measures to make sure that an invasive snake species that’s infamous for hurting bird... 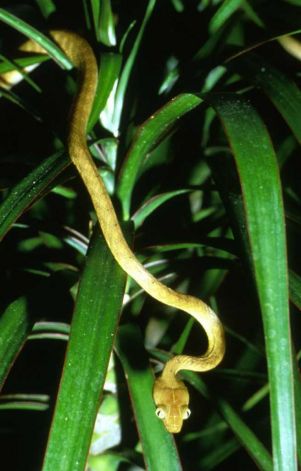 The federal government is taking extreme measures to make sure that an invasive snake species that’s infamous for hurting bird populations doesn’t make its way onto U.S. soil, according to news sources.

The brown tree snake is native to Australia. However, as a result of military cargo ships and airplanes traveling frequently from country to country starting after World War II, significant populations of the meter-long serpents popped up in Guam. Over the years, the snake has killed off nine bird species there.

Hawaii, which is roughly 3,000 miles away from Guam, has a similar climate. As a result, U.S. wildlife biologists fear that the invasive snakes could easily hitch rides to Hawaii and be equally as destructive to the fauna.

To lessen the chances of that happening, Congress recently signed on for a program that will devote about $3 million to hunting and killing the snakes. The program entails 58 workers using thousands of snake traps around Guam, as well as poisons and comprehensive searches of cargo ships planning to leave the country’s ports, all in hopes of curbing the booming population and finding stowaway snakes. Dogs will also be used in the snake hunts.

The program will only last nine months, as various federal departments are struggling with fiscal funds for the coming year and preparing for possible budget cuts.

The Brown tree snake, which is primarily nocturnal, has been known to be aggressive toward humans. However, its’ neurotoxin venom is usually not powerful enough to harm healthy adults.

Photo by: US Fish And Wildlife Service