“That was the hardest thing I ever did in my life by far,” Richard Biehl told petethomasoutdoors.com of his 28-hour... 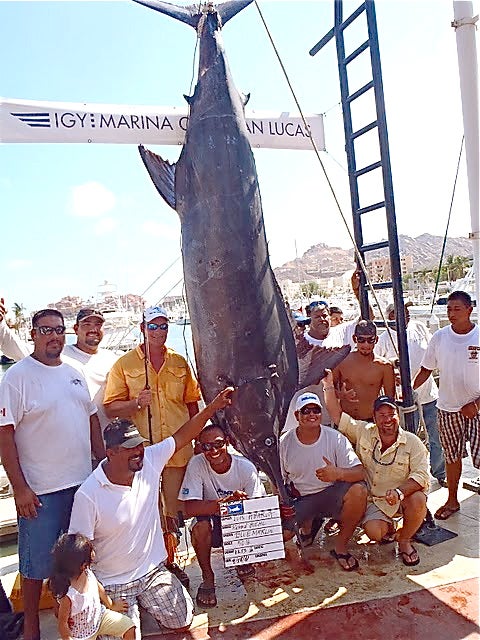 “That was the hardest thing I ever did in my life by far,” Richard Biehl told petethomasoutdoors.com of his 28-hour battle to land what could be the largest billfish ever caught off Cabo San Lucas. The epic battle began Saturday morning when Biehl and friends made their way to what is known locally as the “95 spot” with the hopes of taking striped marlin.

At 8:20 a.m. something big hit a trolled lure at the end of Biehl’s 60-pound test line. When the fish jumped about 400 feet from the boat everyone realized it wasn’t a striped marlin. It was a blue marlin and the crew of the 31-foot yacht, Go Deep, estimated its’ weight at over 700 pounds.

Biehl fought the fish until sunset then gave command of the rod to a deckhand. By that time the boat’s food and drink had run out and another boat was radioed to bring out supplies. Just as daylight faded the fish jumped again and this time the crew estimated the fish’s weight at between 800 – 1,000 pounds.

The crew fought the marlin through the night as Biehl slept. Biehl rose at sunup to resume the fight. Twenty eight hours after he hooked into the fish Biehl brought the fish alongside the boat where it was gaffed.

The fish was weighed at the marina. It was so long that it didn’t clear the ground, making an accurate reading all but impossible. The scale’s hook simply wasn’t high enough. Still, the scale registered an incredible 972 pounds. By using the fish’s length of 11.4 feet, not counting its bill or tail, combined with its girth of 6.25 feet around some estimate that it weighed at least 1,213 pounds.

If the latter weight is recognized it would beat the unofficial record (weight records for fish caught off Cabo San Lucas are not officially kept) of a 1,111 fish caught in the 1980s by 102 pounds. Either way, Biehl’s fish was huge.

So how did Biehl celebrate? He went marlin fishing again on Monday, unfortunately he got seasick.