UPDATE: All Escaped Wild Animals In Ohio Have Been Captured or Killed

As of this writing, all of the animals from convicted felon Terry Thompson’s private zoo have been accounted for. Reports... 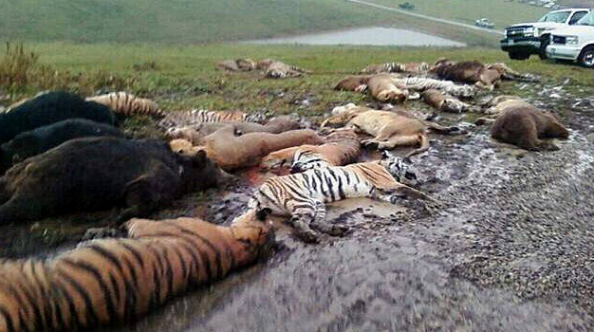 As of this writing, all of the animals from convicted felon Terry Thompson’s private zoo have been accounted for. Reports are that Zanesville, Ohio sheriff’s deputies shot and killed 49 wild animals including 18 tigers, 17 lions, 6 black bears, 2 grizzlies, a baboon and 3 mountain lions. Until late Wednesday evening it was believed that a monkey infected with herpes B virus was still at large but authorities found the primate half eaten by one of the cats. Only three leopards, a grizzly bear and two monkeys were captured alive. All of the dead animals will be buried at the zoo.

Although there have been a few outcries from the public concerning the killing of the exotics, most agree that the authorities did their job professionally. Even many animal activist groups praised the quick decisions of Sheriff Matt Lutz.

“It’s a tragedy for these particular animals, for no fault of their own they’ve been shot, and I can see how difficult that decision was for the police,” said Will Travers, chief executive of the California-based Born Free USA animal welfare and wildlife conservation organization. Jack Hanna, TV personality and former director of the Columbus Zoo, also stated publicly that police made the right call in killing the animals.

Authorities originally hoped to dart the animals but reconsidered once it became apparent what they were up against. “These animals were on the move, they were showing aggressive behavior,” Sheriff Matt Lutz said. “Once the nightfall hit, our biggest concern was having these animals roaming.” One of the first respondents, Sheriff’s Deputy Jonathan Merry, discovered just how dangerous the animals could be at a very short distance. He told media outlets that he shot a black bear that charged him at a distance of seven feet with his pistol. “All these animals have the ability to take a human out in the length of a second,” he said.

What are your thoughts on this unfortunate animal slaughter (don’t refer to it as a “hunt” as some in the media have)? Should people be allowed to own dangerous animals?

See the full story at CNN.com