The Wildlife Conservation Society reports that images of the extremely endangered Persian leopard have been captured by a trail camera... 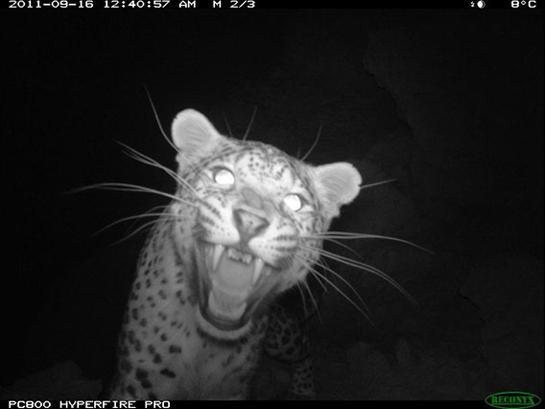 The Wildlife Conservation Society reports that images of the extremely endangered Persian leopard have been captured by a trail camera in the Hindu Kush region of Afghanistan. Biologists are elated at the discovery as the cat was thought to be extinct in the region. The Persian, or Caucasian, subspecies is native to Iran, Turkmenistan, Armenia, Azerbaijan, Georgia, Afghanistan and parts of Russia and Turkey.

It is the largest member of the leopard family and less than 1,200 are believed to remain in the wild. One of the reasons for the cats dwindling numbers was also caught on the trail camera; an image of two armed poachers moving through the area.

Peter Zahler, the deputy director of WCS’s Asia Program told Mongabay.com: “We were sobered by the fact that the cameras also took photographs of local people walking past with guns. Poaching is still a very real threat, and WCS is committed to helping the Afghan government and local communities protect these rare and beautiful animals.” The camera also captured images of lynx, wild cat, Eurasian wolf, red fox and stone marten.

One thing that the WCS failed to report was why the leopard appeared as if he was going to attack the camera. Do Persian leopards hate camera traps? After seeing the picture of the poachers I only hope that the leopard was about to eat one just as the camera was triggered.