Scott Maddox of Wellston, Michigan took what has to be one of the most unusual looking bucks in the history... 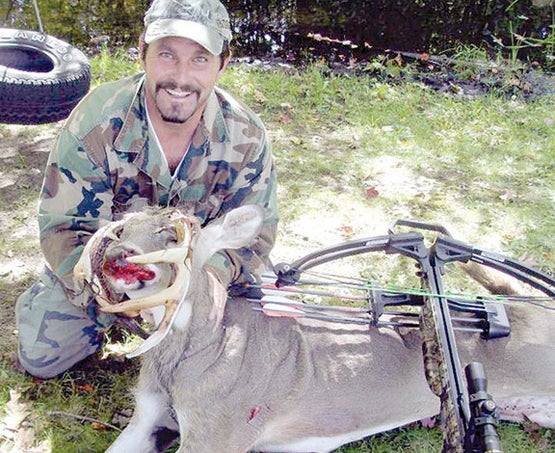 Scott Maddox of Wellston, Michigan took what has to be one of the most unusual looking bucks in the history of deer hunting. In fact, it’s such a strange looking animal that I’m glad there are several pictures of it because trying to describe it in words would prove too difficult a task. But since I get paid to do such, I’ll give it a try.

The “Maddox buck” has an upside down symmetrical 8-point rack that covers most of its face à la hockey goalie mask style. What’s even more extraordinary is the fact that Maddox had been targeting the deer since before deer season and actually shot it on opening day.

The 42-year-old Maddox told woods-n-waternews.com that he didn’t believe the deer was a buck the first time he saw it. “I first thought it was a doe with something hanging off the side of her head. Didn’t think much about it till this year, when I caught it on my trail cam.” That trail camera picture convinced Maddox he was dealing with a very unusual buck. When he shot the buck with a crossbow on opening day of the season he realized the buck probably wouldn’t have made it another season. “He appeared to be perfectly healthy. He was able to eat, although it couldn’t be easy for him. The brow tine on his left side was pushing down on his eye, surely in time it would blind him. I doubt he would have made the winter, he looked a little distressed.”

Maddox plans to have the buck mounted and hung on his wall soon. I think I’d hang it upside down.

Can’t get enough big buck photos? Follow this big buck as he fights, chases, and breeds his way through just one day of the rut.