Illegal ivory trading is on the rise. And while the official numbers are being calculated, 2011 looks to be a... 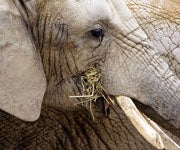 Illegal ivory trading is on the rise. And while the official numbers are being calculated, 2011 looks to be a record-setting year for large-scale seizures of illicit ivory worldwide, according to Traffic, a conservation group that monitors trends in wildlife trading.

There have been 13 large-scale seizures this year, where an estimated 52,196 pounds of ivory was collected – it would take at least 2,500 elephants to produce that much ivory, according to Traffic. The latest discovery took place at a port in Kenya on Dec. 21. The shipment was on its way to Asia. It contained 727 pieces of ivory equaling 5,676 pounds.

Tom Milliken, who manages the Elephant Trade Information System, the illegal ivory trade monitoring system, said in a statement that 2011 is the worst year for large ivory seizures since ETIS began keeping records 23 years ago. A global ban on the ivory trade was placed in 1989 as a means to prevent the extinction of the elephant. But the ban hasn’t stopped poachers or smugglers, and things may get worse.

“We’ve reached a point in Africa’s history where there are more Asian nationals on the continent than ever before. They have contacts with the end use market and now they are at the source in Africa,” Milliken told Reuters.

He said economic development from countries like China could lead to an increase in poaching. Zimbabwe, Zambia, northern Mozambique, Tanzania and Kenya are some of the places where elephants are being poached, he said.

“The trade data suggest that thousands of elephants are being killed a year … I think central Africa has been brutally affected, especially Democratic Republic of Congo,” he told Reuters.

There is an estimated 400,000 to 700,000 elephants in Africa. Some of the illegal ivory sent to overseas markets is used to make jewelry and ornaments.

“The escalating large ivory quantities involved in 2011 reflect both a rising demand in Asia and the increasing sophistication of the criminal gangs behind the trafficking. Most illegal shipments of African elephant ivory end up in either China or Thailand,” he said in a statement.

Smugglers can be difficult to catch because they are constantly changing their routes to avoid detection. And seizures may do little to affect the illegal ivory trade.

“As most large-scale ivory seizures fail to result in any arrests, I fear the criminals are winning,” Milliken said.