Global climate change is one of the most alarming environmental issues right now, unless you’re a parasite. A new study... 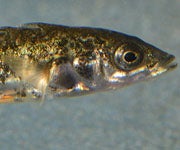 Global climate change is one of the most alarming environmental issues right now, unless you’re a parasite. A new study suggests that a species of parasitic worms is using the rising temperatures to increase its chances of survival at the cost of the fish populations it uses as hosts.

Parasitic tapeworms found in sticklebacks – small fish commonly found in the waters of Europe, North America and Japan – are providing scientists with a model to study the effects of global warming on the balance between parasites and their hosts. Scientists believe that warmer temperatures could create a shift in favor of the parasites, which could increase the rate and number of parasite infections in fish and other animals that eat them.

Researchers from the University of Leicester recently published a study that looked at the relationship between sticklebacks and parasitic tapeworms. Two groups of infected sticklebacks were kept in separate tanks for eight weeks at two temperatures: 59 and 68 degrees Fahrenheit. The researchers found that the fish kept at 68 degrees Fahrenheit had worms that grew up to four times faster, and were on average, four times heavier than the ones kept in the cooler water.

“What we witnessed was that fish infected with the largest worms showed a preference for warmer water, suggesting that these parasites also manipulate the behaviour of host fish in ways that benefit the parasites by maximizing their growth rates,” Dr. Iain Barber, a co-author of the study, said in a press release.

While there is research suggesting that parasites may change a host’s behavior by affecting parts of the host’s brain, Barber told The New York Times that he is not sure how the tapeworm is doing this to sticklebacks, and that he is interested in understanding how parasites exploit hosts to maximize their survival.

A tapeworm’s size plays an important role in their survival and reproductive life cycle. Larger worms have a greater chance of maturing into adults – they produce more eggs, possibly increasing the rate of future infections. Tapeworms spread by infecting small crustaceans that get eaten by fish like sticklebacks; seabirds then eat these infected fish. The worms lay their eggs inside the birds, which spread the eggs in their droppings.

But there is some some good news. Not all worms found in infected fish have the potential to reproduce and affect seabirds – they must reach at least 50 mg before they are generally considered a threat. The researchers found that the worms in the fish kept in the warmer waters weighed on average, 104.9 mg. None of the parasites from the cooler tank reached 50 mg.