Adrian Hinds and his friends got more than fish last week while trolling 31 miles off the coast of Tasmania;... 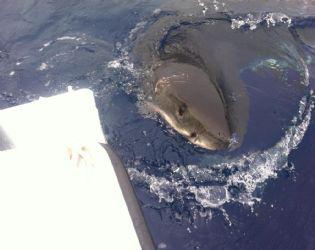 Adrian Hinds and his friends got more than fish last week while trolling 31 miles off the coast of Tasmania; they got thoroughly inspected by an enormous great white shark.

Hinds told the Australian newspaper The Mercury that despite the predator’s monstrous size of more than 14 ½ feet and 1,100 pounds, he and his friends never feared for their lives. “It was awesome. It was just checking out what was going on, pretty much,” Hinds said. “We were pretty awestruck. We never felt any danger.”

The shark circled the boat for several hours pausing only to nudge the lifted propeller and rip into a protective mat that hung over the side. “When it had a go at the protective mat it got stuck into it a bit, had a little bit of a thrash,” Hinds explained.

When asked if he now feared swimming in Tasmanian waters Hinds replied, “Yeah, I still would, I think they’re a fair way out.”

I’m not sure I agree with Hinds. I’d probably avoid showering after such an encounter. Would you? Comment below.