I hope this picture was taken somewhere outside the United States as catapulting dogs over a fence was made illegal... 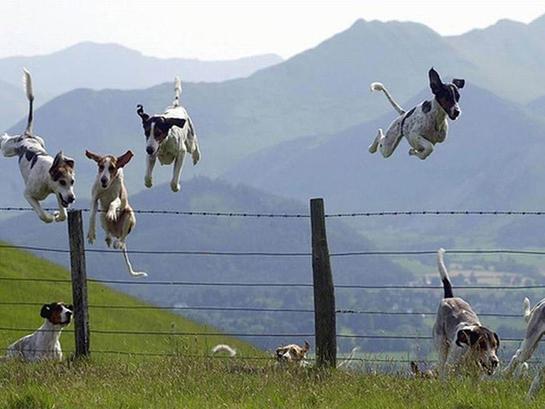 I hope this picture was taken somewhere outside the United States as catapulting dogs over a fence was made illegal in this country more than 20 years ago. The pastime has surfaced now and again illegally of course with “puppy chunkers” utilizing a wide array of catapults ranging from homemade models constructed from scrap lumber to high-stake gamblers who throw them with industrial Japanese manufactured models.

Originating in 1914, puppy chunking … OK, OK, these dog aren’t really being catapulted over a fence.

Actually, I don’t really know what’s going on here. But if you can come up with a funny caption to explain the photo, you will win two boxes of Remington Nitro-Steel High Velocity Shot Shells!

Make it funny, make it clean, and enter often. Write your caption in the comments section!

See the rules for the contest here.