Coyotes are being blamed for a bloody attack in Clinton Township, Michigan last week that left a family pet dead.... 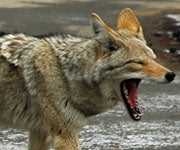 Coyotes are being blamed for a bloody attack in Clinton Township, Michigan last week that left a family pet dead. Julie Wickwares let her dog Duffy, a Cavalier King Charles Spaniel, outside shortly before six in the morning and returned only a few minutes later to find the animal still and covered in blood.

“Within ten minutes I went out to see where he was and I found him in the backyard. I saw the coyote about 20 feet away,” Wickwares told CBS Detroit. She rushed the dog to the veterinarian where it was declared dead due to a snapped neck.

The attack did not only leave Wickwares without a dog, it has also frightened her children and grandchildren. “My 5 year-old grandson won’t even go outside without two adults next to him,” Wickware said. “He’s afraid they’re gonna get him.”

Coyotes are also being blamed for a neighbor’s missing cat.

What’s the best way to remedy pet killing coyotes in a neighborhood, Outdoor Life readers? I bet y’all have plenty of ideas. Comment below!