She may have issues with gun ownership but Rosie O’Donnell apparently has nothing against big-game fishing. In fact, it appears... 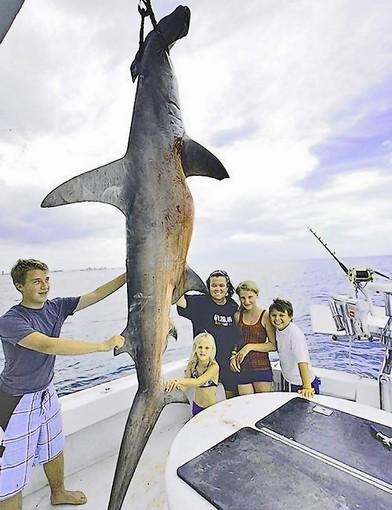 She may have issues with gun ownership but Rosie O’Donnell apparently has nothing against big-game fishing. In fact, it appears as though she’s pretty good at it.

The actress and television host was recently named “This Month’s Celebrity Angler” and a photo of her and her family standing next to an extremely large hammerhead were posted on Florida guide Mark “The Shark” Quartiano’s webpage.

While the exact date of O’Donnell’s trip remains unknown – Quartiano states that the photo is of one of the many excursions O’Donnell took with him in the past two to three years – it was long before Florida banned the killing of hammerheads on Jan. 1.

Although O’Donnell’s participation in shark fishing was and still is completely legal, the actress has drawn a furor of criticism from shark and ocean activists. Sarasota marine conservationist Erik Brush told the Sun Sentinel “Right now sharks are the most endangered animals around. This [O’Donnell’s participation] is basically an endorsement. It sends the message that it’s an OK activity. And this is not an activity that we want celebrities endorsing.”

Neil Hammerschlag, director of the R.J. Dunlap Marine Conservation Program and research assistant professor at the University of Miami’s Rosenstiel School of Marine and Atmospheric Science compared O’Donnell’s legal fishing endeavor to the illegally killing of an endangered species. “She wouldn’t go out hunting tigers. I don’t see her pictured in front of some tiger strung up,” he said. “Yet these are the tigers of the ocean, they’re a top predator and they’re in serious decline. Yet we kill them for sport.”

The attacks against O’Donnell continued through social media sites like Twitter and Facebook. While O’Donnell and her representatives have remained mum on the subject Quartiano has publically sprung to her defense saying O’Donnell’s “a great angler. She’s very conservation-minded. We’ve caught a lot of fish and released a lot of fish. We’ve also caught fish for eating and trophies.” Quartiano continued by saying anglers aren’t depleting shark populations, rather commercial fishing fleets are. “These conservation guys are hitting the wrong target,” he said.