I hope the Kiwis enjoy fried fish because they’re about to get all the milk and dead fish they can... 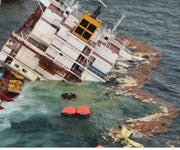 I hope the Kiwis enjoy fried fish because they’re about to get all the milk and dead fish they can handle; now that the container ship Rena broke in two on the Astrolabe Reef off New Zealand this past week.

This latest disaster for the Rena comes almost three months after she initially ran aground on Oct. 5. More than 300 tons of oil and several containers spilled into the water on that day, making it the worst environmental disaster in New Zealand’s history. The oil blanketed coral, and countless birds and fish were killed. Since then, salvage crews have removed 389 containers and pumped over 1,000 tons of oil from the vessel.

Efforts ceased last week, however, when 20-foot waves pounded the ship, ultimately breaking it in two. This resulted in the dumping of more than 300 containers and tons of cargo into the sea — authorities say many of these containers will sink; some have washed ashore or floated into nearby shipping lanes.

Many of these containers contained powdered milk, which turned the sea surrounding the wreck a… well… milky white. Powdered milk has been found on beaches more than 30 miles from the Rena. The salvage crews hope to return to the wreck once the swells dissipate, but many fear that may be too late as the ship will most likely sink before then.

I wonder what powdered milk does to fish. Comment below!