Study Suggests Regulated Hunting Might Be Best for African Lions

A new study suggests what many hunters already know: sport hunting can help save a species. The species in question... 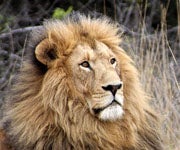 A new study suggests what many hunters already know: sport hunting can help save a species. The species in question is the African lion, and according to the study published in the journal PLoS One, sport hunting can either help or hinder the preservation depending on how well hunting is regulated.

The report stated, “Estimated mean returns on investments (ROIs) from trophy hunting were highest in Tanzania, Namibia and Zimbabwe, and were negative in Zambia and Mozambique. The majority of hunting blocks in Tanzania and (to a lesser extent) Zimbabwe were estimated to be viable, whereas the majority of those in Zambia and Mozambique were estimated to be unviable regardless of the status of lion hunting.”

Based on these findings, the researchers recommended that well-regulated hunting continue:
“While trophy hunting could survive without lion hunting in most areas, the species is an important financial component of an industry which is marginal in some areas and vulnerable to reductions in profitability. Blanket trade restrictions would unfairly punish countries where lion hunting is well managed, and could be negative for lions by undermining the competitiveness of wildlife-based land uses and by undermining tolerance for lions which are typically a high-cost species due to their tendency to kill livestock.”

Sport hunting of the African lion has come under fire lately. Although there is lack of conclusive data, the researchers suspect that the overall lion population has declined by 30 percent in the past two decades, and they may have lost as much as 82 percent of their native habitat.

Sport hunting can provide a much needed incentive for the preservation of the remaining habitat in rural areas in the form of hundreds of thousands of dollars in trophy fees. According to the study, lion hunts, on average, cost the most out of all the trophy species – ranging from $24,000 to $71,000.

Will this report have an impact on the ongoing debate to curb lion hunting in Africa? Change the minds of some that stand adamantly opposed to sport hunting? Comment below!