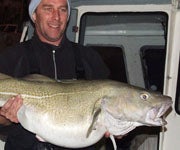 British angler Marc Hemsley broke his father’s 22-year-old record when he caught a monstrous 36-pound, 8 ounce cod off Shoreham, West Sussex this week. Marc was fishing with his father, Des Hemsley, 65, when he caught the fish, and the elder Hemsley knew right away that this fish would set a harbor new record.

“I knew as soon as I saw the fish on the deck that it was going to beat my record. Marc was pleased but I was even more chuffed* because it felt like we are keeping the records in the family,” Des Hemsley told the U.K.’s Daily Mail.

It took Marc 25 minutes to reel in the future half of fish and chips. Although it beat his father’s record by two pounds, Marc will have to catch something much larger to beat the national record belonging to a 58 pound, 8 ounce fish caught at Whitby in 1992.

Marc gave his trophy to his father who quickly filleted it into 15 servings.