Australians Battle Invasive Toads by Turning Them in to Purses

Culpepper & Co., Inc., an exotic materials supplier, is helping Australia in the battle to control the invasive cane toad... 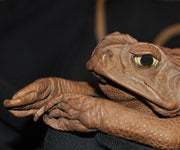 Culpepper & Co., Inc., an exotic materials supplier, is helping Australia in the battle to control the invasive cane toad population by turning them into purses.

The cane toad, Bufo marinus, native to South America, was introduced to Oz in 1935. The Australian Bureau of Sugar Experiment Stations imported them from Hawaii (where they are also a pest) in an attempt to control the native cane beetle. The toads failed to control the devastating insect population.

However, the toads quickly established themselves in Australia and have since been causing ecological problems. The cane toad is toxic to most animals so it has no natural predators–pets and wildlife are getting poisoned or killed from eating them. Efforts made to keep them from spreading across the continent have met with 70 years of failure.

Not to be deterred, some Australians have kept up the good fight by having a little fun in the process. Some pubs offer beers priced at one bag of dead cane toads per pint; golf courses often have late night shoot outs utilizing the tiny toxin carries as balls; and some cricket clubs swing at, you guessed it, instead of balls. But for my money, nothing says helping the environment by taking something unwanted and turning it into an item of demand. (And believe me, my lady friend wanted a toad cane purse the moment she saw one…Ok. That’s a lie. I think we all know that.)