A new map published in the February issue of the American Journal of Tropical Medicine and Hygiene shows where people... 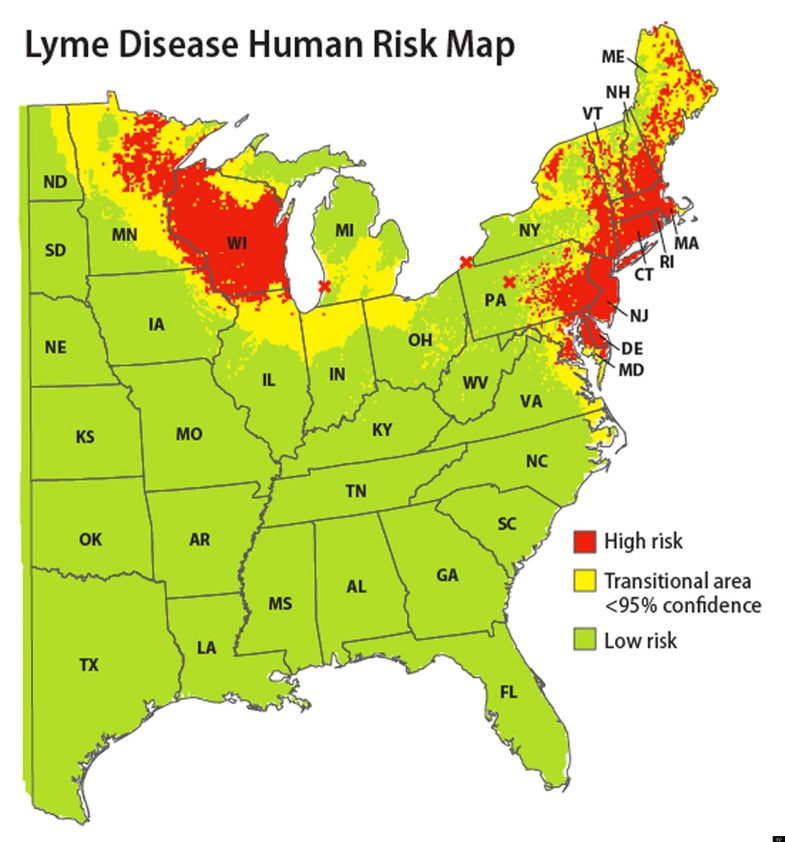 A new map published in the February issue of the American Journal of Tropical Medicine and Hygiene shows where people have the highest risk of contracting Lyme disease and offers researchers clues about where the disease likely is spreading and information about the rate at which ticks are infected with the bacteria that causes it.

The map shows areas of a “clear risk” of Lyme disease (the Northeast, from Maine to northern Virginia), “high-risk” (the upper Midwest, including most of Wisconsin, northern Minnesota and northern Illinois) and “emerging risk” (the Illinois-Indiana border, the New York-Vermont border, southwestern Michigan and eastern North Dakota).

The map was drawn utilizing data collected between 2004 and 2007 and although much of that data might be outdated by now, it will certainly help physicians with their diagnosis of the disease. “The key value is identifying areas where the risk for Lyme disease is the highest, so that should alert the public and the clinicians and the public health agencies in terms of taking more precautions and potential interventions,” said the study’s lead author, Dr. Maria Diuk-Wasser of the Yale School of Public Health, in an interview with Holly Ramer of the Associated Press. “In areas that are low risk, a case of Lyme disease is not impossible but it’s highly unlikely, so the clinician should be considering other diagnoses.”

Lyme disease is transmitted by the bite of deer ticks and although antibiotics easily cure most people of Lyme, people who aren’t treated can develop arthritis, meningitis and other serious illnesses. According to the Centers for Disease Control and Prevention, more than 30,000 people were confirmed or probable cases of Lyme disease in 2010, the latest data available. More than 90 percent of those cases were from Connecticut, Delaware, Maine, Maryland, Massachusetts, Minnesota, New Jersey, New Hampshire, New York, Pennsylvania, Virginia and Wisconsin. Data obtained while creating this map showed that about 1 in 5 ticks in these areas were infected with the bacteria that causes Lyme.