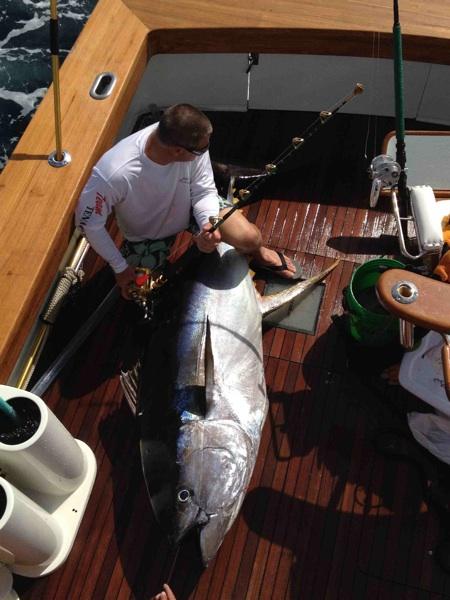 The Western Outdoor News reported last week that a potential world record breaking yellowfin tuna was caught in Puerto Vallarta. The fish went 90 inches by 62 inches and was caught by Ron Tegland of the Tenacious, according to the blog…

“Oh. My. God. My buddy Eric Huff at Erick’s Tackle just sent me this pic. It’s a 90×62 inch yellowfin tuna taken by Ron Tegland on his yacht Tenacious. Word is he caught it yesterday in the hot Puerto Vallarta zone that’s been kicking out so many cows the past few weeks.
_
It taped out at 432.4 pounds. Huge fish. Mind blowing… look for more details as they come out. In the meantime, the timing couldn’t be better for jumping on a flight to P.V,_” Brandon Hayward wrote on the WON Blog.

The current record is held by Mike Livingston and weighs 405 pounds. It measured 85 inches by 61 inches. Stay tuned as we try to hunt down more details of this catch.

See the photo gallery and story behind Livingston’s record tuna.