A Summerville, S.C. high school principal has removed the hunting trophies from his office after deciding the controversy surrounding his... 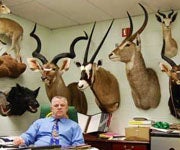 A Summerville, S.C. high school principal has removed the hunting trophies from his office after deciding the controversy surrounding his collection was a distraction.

Buddy Chapel’s trophies, which include several shoulder and full-sized mounts of a lioness and African animals, were featured in a Jan. 19 story in The Post and Courier’s Your Lowcountry section. In that story, Chapel explained his collection and the fact that he told students from the beginning that he would meet with them outside of his office if they found the animals offensive or they made them feel uncomfortable. Chapel said most students found his animals cool.

“They have a great time,” he said. “It’s like a big zoo for them. It hasn’t freaked any kids out that I know about.”

Following the story, the paper received two letters to the editor urging Dorchester District 2 leaders to have the animals removed. District spokeswoman Pat Raynor told The Post and Courier that although the district was aware of the letters they did not instruct Chapel to remove the animals from his office.

“I’m sure they talked about it,” Raynor said. “But I’m not aware that there was any directive for him to remove them.”

Regardless, Chapel removed his collection this past weekend. He could not be reached for comment. Alison Harvey, one of the people who wrote a letter protesting the animals in Chapel’s office was reached. She said, “When there are so many controversial issues that students and teachers aren’t allowed to discuss in a public school setting, why would something as controversial as this be permitted?”

I faced this same problem years ago when I taught American History at Bailey Middle School in Austin, Texas. I had a 12-foot alligator skin on the wall of my classroom. I used the skin as a “prop” when discussing such things as what Spanish explorers found when they came to the New World, history of the Southern States and the skin trade in early America. Like Chapel, my students thought the skin was cool. It remained on my wall for two years until one parent complained and I was directed by the principal to remove it from my classroom. I protested, saying that only one parent of the 320 students I had over the two-year period complained about it. The principal responded that one was all it took, so the gator came down.

It’s sad when a vocal minority has that much power. I imagine that’s what happened to Chapel. I imagine it will keep happening in schools in the future in the years to come.

Thoughts? Come on, you know you have some! Comment below!