A new study suggests that shark fins — a controversial and expensive culinary ingredient — contain high levels of a... 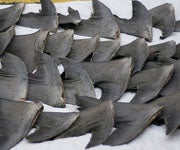 A new study suggests that shark fins — a controversial and expensive culinary ingredient — contain high levels of a chemical harmful to the human nervous system. This neurotoxin, BMAA, has been linked to Alzheimer’s and Lou Gehrig’s disease.

These findings could help decrease demand for shark fins and discourage people from shark-finning practices.

“The concentrations of BMAA in the samples are a cause for concern, not only in shark fin soup, but also in dietary supplements and other forms ingested by humans,” said Deborah Mash, study co-author and director of the University of Miami Brain Endowment Bank, in a statement.

The researchers collected small clippings from the fins of seven species of sharks found in the South Florida waters. The concentrations found in the fins are similar to the levels found in the brains of patients with Alzheimer’s and Lou Gehrig’s disease, according to Mash.

Shark fins are often used to make shark fin soup, a delicacy that can cost as much as $100 per bowl. The growing controversy behind the demand for this dish and the dwindling number of sharks has caused some restaurants and hotel chains in Asia to slowly move away from selling it. Some U.S. states have also started banning the sale of shark fins.

Declining Shark Populations
An estimated 100 million sharks are killed globally each year, and of that, an estimated 73 million are killed just for their fins. Indonesia, India, Spain, and Taiwan have the highest number of reported shark catches commercially, according to the Food and Agricultural Organization of the United Nations. Thirty-two percent of the sharks species assessed by the International Union for Conservation of Nature, a global environmental organization, are considered threatened or near-threatened with extinction.

Even when sharks are not specifically targeted, they still face natural and man-made problems detrimental to their survival. Sharks make up approximately 25 percent of the tuna and swordfish fisheries’ bycatch, when species other than the targeted fish get caught unintentionally, according to the Pew Environmental Group. Bycatch sharks are often killed in the process or are too injured to survive when released.

Some environmental groups have pointed at sport fishermen and shark tournaments for contributing to the decline of shark populations in the U.S. Released data from the NOAA Recreational Fisheries Statistics Program shows that more than 490,000 sharks were killed from 2004 to 2008. However, some fishermen might argue that this is a small number in comparison to the millions of sharks killed by commercial fishermen.

While there are tournaments that end up with weigh-ins at the dock, successful catch-and-release-only events do exist. And projects like the Shark-Free Marina Initiative, which works with anglers, marinas and businesses to prevent and discourage the killing of sharks, are joining forces with fishermen to promote better conservation efforts in hopes to preserve remaining shark populations.