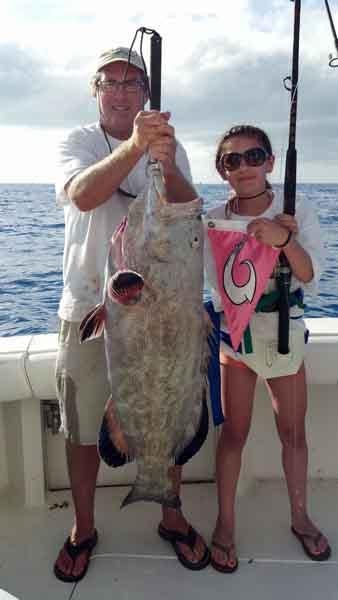 Last year young angler Brielle Bennett took first place in the International Game Fish Association’s Female Smallfry division of world records. If her performance on March 24, 2012 is any indication of what 2012 holds, she’ll take the first place title for a second year in a row.

The IGFA announced last week that the young Miss Bennett was fishing Key West, Florida with her uncle Captain Brian Bennett when she landed a 38-pound black grouper (Mycteroperca bonaci).

It took Brielle about 10 minutes from time the grouper swallowed her live goggle eye until she was able to hoist it up on the back deck.

The catch is even more impressive when you compare the size of Miss Bennett to her catch – that fish is almost as large as she is.

The current IGFA all tackle record is 124 pounds.

Black groupers are solitary fish capable of reaching weights of over 200 pounds and measuring 60 inches in length. Despite their moniker, they are generally olive or gray in color with black and brassy spots. It’s a warm water fish, found in the Atlantic from Massachusetts (since when is the ocean water off Massachusetts warm?) down to Brazil. It is generally targeted in Florida and the Caribbean (where it is not wicked cold).

Congratulations on your catch Brielle Bennett!