Violet D’Mello of Britian was mauled by cheetahs on her 60th birthday at a South African game preserve this past... 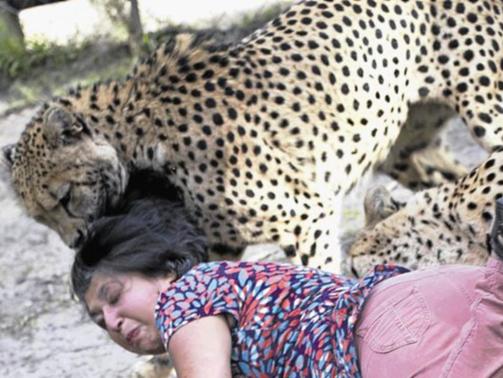 Violet D’Mello of Britian was mauled by cheetahs on her 60th birthday at a South African game preserve this past week. D’Mello was visiting the Kragga Kamma game reserve near Port Elizabeth with her husband when the attack occurred. According to the Mail Online, D’Mello paid an additional £4.50 (around $8) to pet hand-reared cheetah brothers Mark and Monty.

D’Mello was in the enclosure with the two cats when one of them grabbed eight-year-old Camryn Malan and began biting his leg. The boy’s seven-year-old sister Calum panicked at the scene. D’Mello told the young girl not to run fearing it would attract the cats to her. D’Mello was midsentence when one of the cats knocked her to the ground.

D’Mello describes the attack to the Mail Online: “I never imagined it would attack me because I was an adult. But the next thing I knew I was on the floor and the cheetah was right on top of me. It started scratching me really badly and then I could feel the other one come up too and one of them got my neck in its mouth. I was just screaming and trying to get my hands up around my neck to protect myself, but I was being bitten all over my legs and down my side near my kidneys. People all around were screaming, and I had no idea how I would escape. Something inside me just said, ‘Don’t move. Don’t move at all. Don’t react, just play dead.’ “

Although tourists and game personal reacted quickly to the attack, D’Mello’s husband photographed the three-minute event. He later told authorities he didn’t realize what was happening.

Your wife was getting mauled by cheetahs! That’s what was happening!

Mrs. D’Mello was taken to the hospital where she received treatment for her injuries to head, stomach, and legs.

It is unknown what triggered the attack.