Eddie Bithell didn’t just throw the unwritten rule of treating every animal with respect out the window. He threw it... 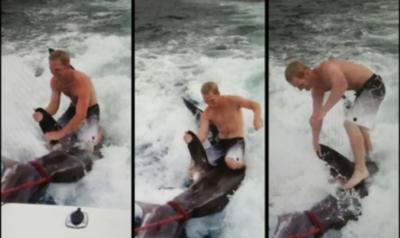 Eddie Bithell didn’t just throw the unwritten rule of treating every animal with respect out the window. He threw it behind a boat and surfed on it.

Bithell and several friends were angling for swordfish in the Western Bay of Plenty off New Zealand when they accidentally hooked into a thresher shark. Group member and boat owner Zane Wright told the Otago Daily Times, “We usually send them on their way but this one was hooked in the tail and it ended up drowning, which is unfortunate. There is nothing we could have done about it. We’ve had people say you could have cut the line if you suspected it was shark, but it’s not what I do, I don’t want to leave sharks swimming around with metres of line in them.”

The group brought the shark to shore where they left it overnight. The next day they towed the shark back into the ocean to “feed it into the food chain,” according to the Daily Times. It was on this return trip that Bithell for some reason decided to surf the shark. The incident was filmed by and later posted on Facebook by group member Mark Collins.

The filmed stupidity spread across the Internet like wildfire. The following anger spread just as fast, something Wright regrets. “That’s what’s really stirred me up about this. Nobody’s got my side of the story, or knows what I am for and how we fish,” Wright told the paper. “I go fishing up to twice a week. I’ve been fishing all my life and never killed a shark. It’s not something that was planned. I’ve been game fishing since I could walk and caught hundreds of sharks and always gone out of my way to release them unharmed. I’m all for shark conservation and disgusted about what happens commercially with long lining.”

Unfortunately, what Wright says doesn’t matter. The video that made it onto the Internet does. It’s what people – especially those who feel strongly against fishing – will remember.