Citing that it is illegal to possess a rare or endangered species, the California Department of Fish and Game confiscated... 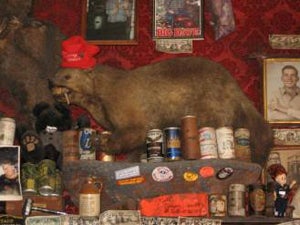 Citing that it is illegal to possess a rare or endangered species, the California Department of Fish and Game confiscated a stuffed wolverine and red-tailed hawk from a bar in Georgetown last Tuesday, despite the fact that the animals had been on display for more than 50 years.

Georgetown Hotel and Saloon bartender Anthony Fox told FoxNews.com that officials from the CDFG originally came into the bar looking for something other than the mounts they removed.

“They had been in a week before on a report that the two roosters on the wall were turkey vultures or California condors,” Fox said. “Then he noticed the wolverine.” The officials removed the illegal mounts without issuing a citation. The matter of whether to issue a citation will be referred to the El Dorado District Attorney’s Office for further investigation.

The story says the bar, which first opened in 1896, is “the centerpiece of Georgetown. He added, “We have stuff on the wall that dates back to the ’40s and ’50s. It’s part of the town; it’s part of the culture. And by them taking that, they really did take part of history, part of our town. We’re going to leave the space that was there vacant, and we’re going to put up a plaque. We’re not really happy about it. It is kind of ‘big brother’ flexing their arm.”

Is this just a case of the state of California asserting their power or was this a legitimate matter that demanded legal action? Comment below!