It’s a one in a million shot. The photo came from the camera of Colorado University-Boulder student Andy Duann and... 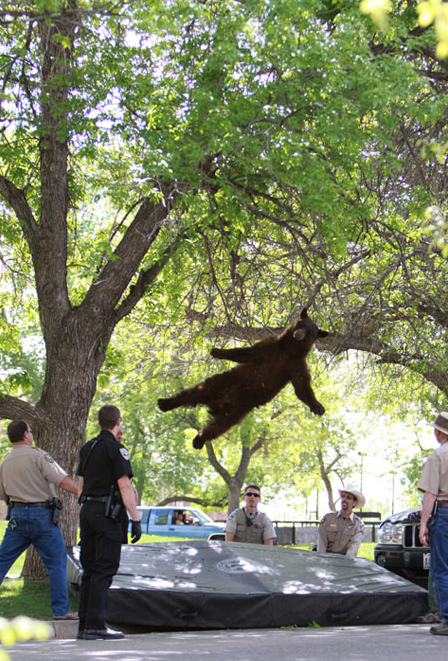 It’s a one in a million shot.

The photo came from the camera of Colorado University-Boulder student Andy Duann and the story behind it is a strange one. It all started a week or so ago when a bear wandered onto the university campus. This rightfully alarmed some of the coeds and the authorities were contacted.

The authorities came, and after finding the bear relaxing in a tree, took action. They placed mats commandeered from the athletics department under the bear’s tree, then darted him with a heavy tranquilizer. Student Duann saw the activity from the fifth floor of a nearby building and bolted downstairs camera in hand.

He took more than 300 photos of the bear relocation effort; the one above was the absolute best. The photo went viral, spawned a ton of memes, a Facebook page, and countless tweets. That bear photo is just too cute!

Cute as he may have been, he was still a bear in a very public place, a dangerous situation for the bear and people alike. After the bear was darted, authorities fitted him with an ear tag and released him some 50 miles away from the university. Unfortunately the bear came back. Or tried. Last week he was killed when he was hit by two cars only two miles from campus. A picture of the aftermath of that little incident failed to go viral. People, it seems, only like memes of cute bears. Not bears that cause injury to motorists.