Early Hunters Not to Blame For Woolly Mammoth Extinction

A recent analysis of thousands of fossils and ancient artifacts indicates that woolly mammoths went extinct due to a combination... 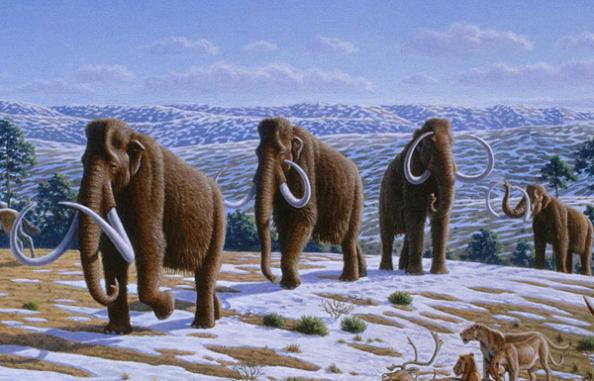 A recent analysis of thousands of fossils and ancient artifacts indicates that woolly mammoths went extinct due to a combination of habitat loss, climate change and hunting.

The last mammoth roamed Siberia between 4,000 and 10,000 years ago and until now, many experts thought they were hunted to extinction by early man. Relatively speaking, the mammoth extinction wasn’t all that long ago, experts say that moose and other large mammals crossed the Bering Strait to North America about 14,000 years ago.

This from the Science Daily…

_”Though humans had hunted woolly mammoths in Siberia for millennia, it wasn’t until the last ice age that people crossed the Bering Strait and began hunting them in Alaska and the Yukon for the first time. After a harsh, 1,500-year cold snap called the Younger Dryas about 13,000 years ago, the climate began to get even warmer. The rising temperatures led to a decline in woolly mammoths’ favored foods, like grasses and willows, and encouraged the growth of low-nutrient conifers and potentially toxic birch. Marshy peatlands developed, forcing the mammoths to struggle through difficult and nutritionally poor terrain, and forests became more abundant, squeezing mammoths out of their former territory.

‘It’s not just the climate change that killed them off,’ researcher Glen MacDonald said. ‘It’s the habitat change and human pressure. Hunting expanded at the same time that the habitat became less amenable.'”_

This finding shouldn’t be all that surprising to anyone with a basic understanding of ecology. While it’s exciting to think about extinction in dramatic terms of meteor showers and massive volcano eruptions, most species go extinct due to a combination of factors. Habitat loss, pollution, invasive species, and over harvesting are the real killers of species.

Let’s let the woolly mammoth serve as a reminder of that.