Montana authorities have captured a grizzly sow responsible for killing more than 70 sheep over an eight-day period. The killings... 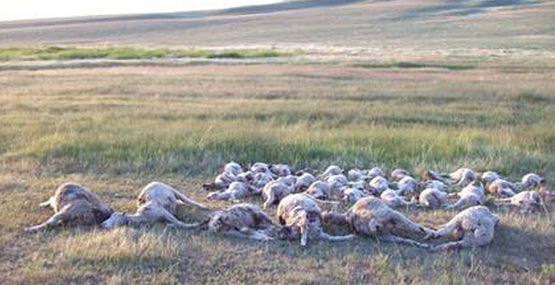 Montana authorities have captured a grizzly sow responsible for killing more than 70 sheep over an eight-day period. The killings took place within a 20-mile radius of Great Falls, Montana between June 16 and June 22, with 72 sheep killed and another four injured. Fifty sheep were killed at one location over two nights. Only two of the sheep were eaten.

The livestock killing bear was traveling with a cub that scientists believe wasn’t responsible for any of the slaughter. Both the sow and cub were in poor health with the cub at an extremely low weight. Mike Madel, a grizzly bear management specialist at Montana Fish, Wildlife and Parks, told FoxNews.com, “The sow wasn’t in very good shape. It was the youngest mother and the smallest cub I had ever found. She was four and a half years old and the cub was 32 pounds. Usually at that age they weigh around 50.”

Why the grizzly killed livestock isn’t known or understood. Carol Bannerman, a public affairs specialist with the U.S.D.A.’s Wildlife Services told FoxNews.com, “Sometimes the predatory instinct of grizzly bears just kicks in and they go to killing livestock. The problem is, once they discover how easy it is to kill sheep in particular, they seldom stop killing [them].”

Both bears have been relocated to an area in British Columbia.

Was this the right move or should the bears have been euthanized? Comment below.